A couple weeks ago, I headed to Michigan's Upper Peninsula for my annual U.P. autumn shoot. I was looking forward to it as I had a lot on my mind lately.  My wife and I have had a lot of major life events thrown at us the last two years. Starting with my dad passing away two years ago, and my mom just six months ago, with lots of stuff in between and some stuff after.  All those big things that we face with middle age. With a lot of those things behind us, I was in an optimistic mood.

One of my favorite things about photography is the way it lets you forget your problems. Once I'm in the field and start composing a shot, the world just falls away.  You start seeing the pictures around you, and you feel as if you're one with nature. Hours pass and the sun has set, the night is coming on, and you start thinking about night shots. And, do I even need to sleep?

So, I was looking forward to this trip. But my mom was in the back of my mind. Every time I would leave to shoot somewhere, she always wanted to hear where I was going and what I planned on doing. More importantly, she would call the morning after I got home to ask how it went, and did I get any good pictures. I decided not to dwell on that and just enjoy the trip.

So on Tuesday the third of October, I found myself arriving at the Porkies, after a nine hour drive. Driving up to the overlook at Lake of the Clouds, I found myself in a light rain, and so much fog, I couldn't see the lake. Disappointed, I drove back into Silver City, and stopped for a beer. My friend Neil Weaver was there as well, and the conversation turned to photography and thoughts of dinner. Fortunately, Neil's phone buzzed before we ordered food. Mutual friend, Aubrieta Hope was sending a text to let us know that conditions were clearing up, and were we going to be out shooting? We decided, why not, and headed up to the Lake.

Finding ourselves on the Escarpment Trail, overlooking Lake of the Clouds, conditions were improving quickly, but we were still faced with clouds and fog. I was further east on the trail, so that I could see the entirety of the lake, hoping for a sunset in the background. Neil, Aubrieta, and Jeff Caverly were poised to the west, hoping for a sunset as well.

Suddenly, the sun started to set and rising fog from the surrounding forest began to glisten with the reflected sunlight. At first the colors were quite subtle, and then they became quite vivid, with the winds carrying the fog upwards at a fast pace. I almost couldn't believe what I was seeing. It was the single most incredible sight, I've witnessed in nature. At first, I thought I had made a mistake, being so far east on the trail. I could only imagine what my friends must be seeing further west. I started to pick up my gear and to run and join them, when it occurred to me, that whatever was happening, it would be over by the time I reached the others. So I set up my tripod and took the video posted below. As I was taking the video though, I realized that it may not last long, so I quit filming and started taking photos.

The one thing that has stayed with me, since this event, is what I felt at the time. Although, I'm not one to put much stock in otherworldly thinking, I surprised myself when unconsciously, I smiled and said "Thank you Mom", out loud.

Meeting up with my friends, I discovered that they had some great sunset shots, but had largely missed the scale of what I was lucky enough to witness. Sometimes it's good to lag behind.

Untouched video of the sunset - No saturation needed

In the photo, I lightened the foreground but decided against saturating the sky color

It can be difficult to balance the sky exposure, along with the foreground in these kinds of photos. Although I have graduated ND Filters, I often don't like the transition, on uneven landscapes, that the filter creates. With these shots, I tried a new method that I have not done before, that I picked up from John McCormick of Michigan Nut Photography.

I installed a Cokin Z-Pro Series Filter Adapter Ring, to my lens.  On the front of the adapter ring, I had put adhesive backed felt, so that the filters don't scratch. The idea is, to gently move the filter around, in a circular pattern, so that you have less visibility of the transition. In my case, I actually used the filter upside down, (as shown in the photo below) and it seemed to work fine. I didn't have a lot of time to sort through filters and the one I grabbed was quite dark on the top half. That did a good job of keeping the sky dark and keeping the foreground lighter. Some of the photos seemed a little soft at 100%. That may be from the movement of the filter. Obviously, I could have tried using a filter holder and doing things the proper way, but I actually liked the way this worked out for me. The traditional way, may have given me sharper images, but with the uneven horizon, I think this method worked out great, and the top two are sharp enough for most sized prints or canvases. I had a lot of photos from that shoot, that I liked. I've just posted my favorites here. Thanks for stopping by! 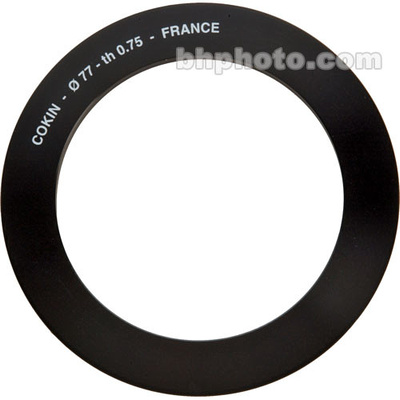 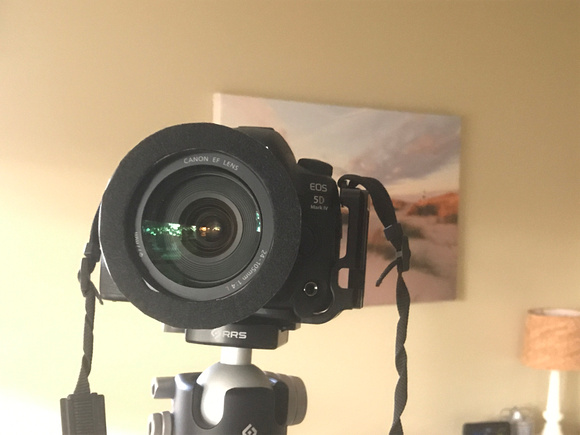 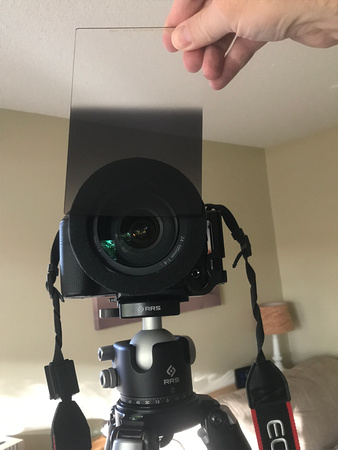