For some time now I've been wanting to photograph owls, but especially a snowy owl. There is something about these birds that is fascinating. Their eyes are captivating and just seem to draw me in. I spent many days last winter driving the countryside, looking for a snowy owl, but to no avail.

On January 12 I was lucky enough to visit the Howell Conference and Nature Center for a “Birds of Prey” workshop.  The workshop was put on by wildlife photographer Steve Gettle, who makes his home in Brighton, Michigan. Steve has been photographing wildlife for over 25 years, and it shows. His 25-minute slide show presentation was not only jam-packed with outstanding photographs, but seemed to end just as soon as it had begun. The presentation was followed by a short Q&A period, which was very casual and informative.  His knowledge of animal behavior and photography is second to none.  The conclusion of the Q&A session found us ready for lunch and, lucky for us, the nature staff had cooked up a wonderful meal of lasagna, vegetarian lasagna, salad, and garlic bread.  In addition to the tasty food, I enjoyed talking photography with others at my table. It’s always great to bond with others who share the same passion for photographing wildlife.

After lunch we headed to an outdoor site for the shoot. The site was down a gravel road a short distance from the nature center.  We came to a field surrounded by woodland. Spread out on the edges of the field were custom-made perches with the birds we there to see. Unfortunately, we did not have snow for this year’s shoot (I think we were all hoping for some snowy shots.)  On the plus side, the weather was a balmy-for-January at 60 degrees.  The warm weather made for a very relaxing outdoor shoot. 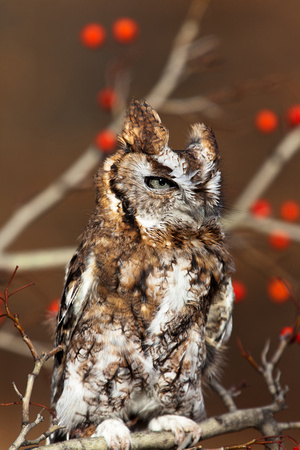 The photographers were welcome to walk around the field and visit whichever bird they wanted to shoot. Each bird had a handler that would answer questions about them and let photographers know how close they could get to the subject.  A 200mm lens, or longer, is recommended. I used my Canon 70-200mm lens and found it adequate. For the second half of the shoot I used a 2X extender on the same lens and it was helpful to have that extra reach. 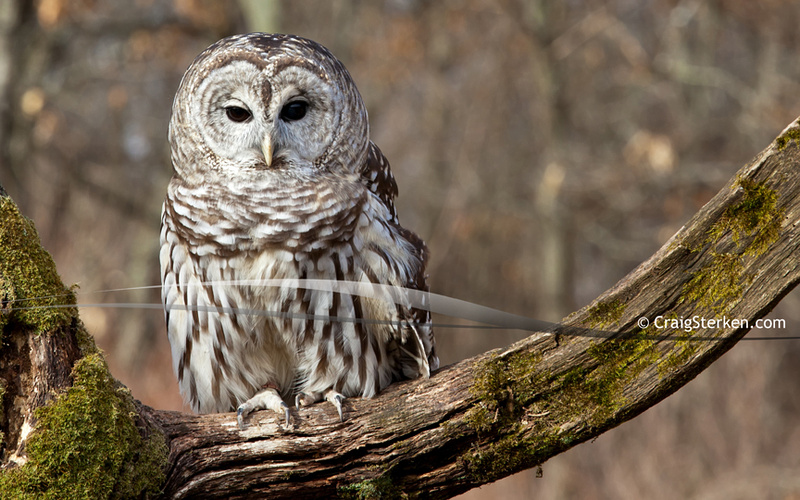 Arriving at the field I headed straight for the snowy owl. This was the bird I most wanted to shoot and only two others were setting up to photograph this beauty. She was a little grumpy and was giving the handler some trouble about getting on the perch. After some coaxing and gentle words she obliged and hopped on the perch. The snowy owl is a stunning bird to view and to photograph. She was on the constant lookout and turning her head from side to side. Patience paid off as several times she stopped her scan of the skies and looked straight into my lens. Click! I got the shot I came for. 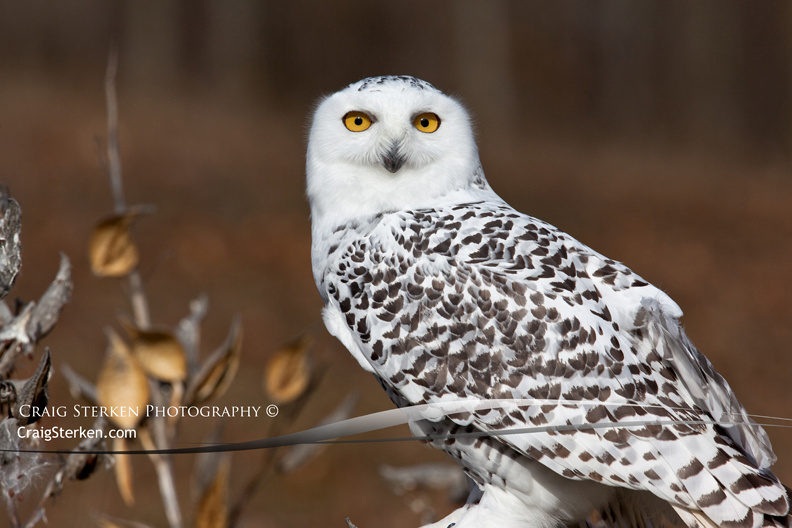 Over the next two hours I would photograph all of the birds they had out that day.  The time flew by and I could not help but be impressed by these regal birds. I have only seen owls from a distance in the past, usually when perched up high on a telephone pole or a similar setting. It was great to see them up close and at eye level.  In addition to the snowy owl were the Eastern screech owl, the great horned owl, the barred owl, another horned owl, a red-tailed hawk, and a bald eagle.

Amber Montgomery :^)(non-registered)
Hi Mr. Sterken, I was visiting the Ludington website for a map, because I wanted to visit up there soon to get a couple shots before the weather gets to bad. I have been into Photography for about 3 years, but my love and passion for it has definitely changed my view of what beauty truly is. I absolutely love your work and I admire it so much that I went out a took a couple of shots right after school. Your work gave me another perspective than what I'm use to, so thanks so much!! -Amber-
No comments posted.
Loading...
Subscribe
RSS
Recent Posts
Ocqueoc Falls in Michigan's Lower Peninsula "The Mitten" Pictured Rocks National Lakeshore Roam-Inn Review Spiritual Sunset Root Beer Falls in the Upper Peninsula of Michigan Bay City Chalkwalk 2017 Mosquito Falls at Pictured Rocks in the Upper Peninsula of Michigan Ghost Forest of Sleeping Bear Dunes 2017 Bay City Fireworks from Wenonah Park Chicago Fireboat Joseph Medill
Keywords
Michigan travel tourism outdoors nature photography water downtown upper peninsula flowing
Archive
January February March April May June July August September October November December
© Craig Sterken Photography
User Agreement
Cancel
Continue